My title may ring a bell for those who have read Gabriel Marquez’ book, ‘Love in the Time of Cholera’. Good! You got my reference, that’s where I drew the concept… because why not? It’s catchy and that phrase perfectly encapsulates my experience in Kuala Lumpur.

Malaysia’s newly appointed Prime Minister Muhyiddin announced the Movement Control Order (MCO) to curb the spread of the virus. This MCO includes a series of measures such as shutting down borders, closing all non-essential services and limiting mass gatherings from Mar 18 – Mar 31 (MCO Phase 1), April 1-14 (MCO Phase 2), and April 15- 28 (MCO Phase 3). This meant staying at home and only leaving the house to buy essentials like groceries and medication. Restaurants could stay open from 8 AM to 8 PM, and would only be allowed to provide takeaways. Deviants will have to pay RM 1,000 and may serve up to six months in prison. To simply put- Duduk di Rumah! (Stay at home), that’s what Malaysian Government is trying to spell for everyone in bold scarlet letters. So there, that’s Malaysia’s side of making things right in this unprecedented situation we are all in.

As an obedient individual (*winks), of course, I complied. In other words, I stayed at home for two weeks. When MCO kicked off , it immediately staved the usual human presence off the streets. Under the MCO, the only time you are allowed to go outside is when you buy food and essentials. I’m running low on supplies and needed to forage food.

I waited for a bus for almost three hours at the bus stop.  But to no avail. Little did I know that the bus service is only available from 6 AM to 10 AM. Thus I was left with one option, to hail a cab.

As far as I can remember, I was the only soul on the street swallowed by an eerie emptiness made creepier with a murder of crows cawing at me. I guess it’s the same scene in all major metropolises around the globe, taking a break from the usual hustle and bustle.

Unfortunately for me there’s no bus available, so I had to hail a cab to take me to Pasar Seni (Central Market) where the famous Petaling Street is. I alighted at the nearest transport hub so our cab needed not to pass through a police checkpoint. I took a deep breath, chugged a bottle of water, then my walking meditation commenced- now I’m in my element. Walking has always been my way of getting around, because why not? Walking is easy to get by and it’s for free! Every Ringgit counts, lah.

I carried on and snaked my way through the main streets as stealthy as possible so not to attract unwanted attention. As I immersed myself deep in the narrow alleys I found these spectacles meant to lift my spirits up during this time of isolation. You’ll never know what you would find in between the cracks, that eureka moment, lo and behold, the Street Art scene of Kuala Lumpur, just my kind of place.

I prefer the term ‘Street Art’, not graffiti, with capital letters to pay deserved respect to the artists. These random pieces of Art can be found NOT in museums, but in the least expected places; run-down buildings, street signs, or garbage bin. They are concealed in places where people don’t pay much attention to for most of the time, yet they’re just in plain sight. 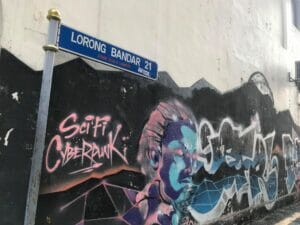 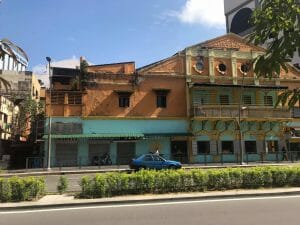 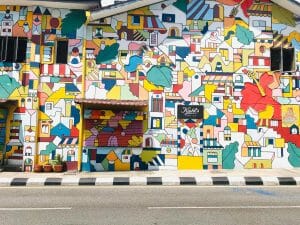 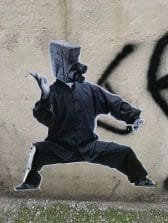 As an example, here’s a whole stretch of wall covered in art. Well I guess that is the kind of wall we all want. 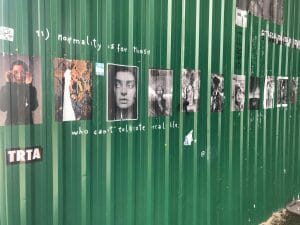 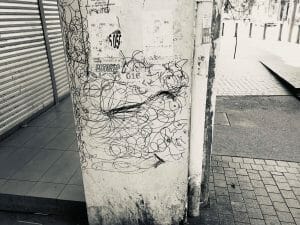 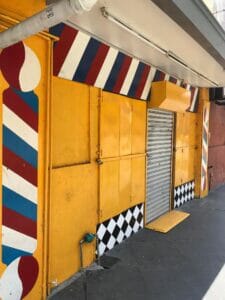 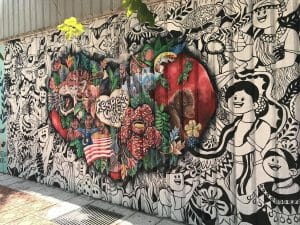 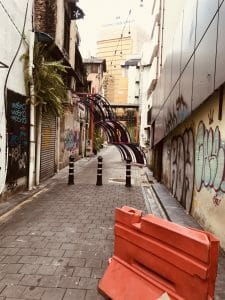 I cannot comment on the technique employed, the strokes, the colour combination, for me that is not the main point of Street Art. It tells us about unique narratives; of communities, social structures and struggles, of gentrification, of revolutions, of progress, and of nationalism. Street art to me is a set of lens where I can see community life. There were images of a Kampung (Malaysian village), an auntie, Mamak (South Indian Muslim food stalls), children playing; these are evoking sense of belongingness. 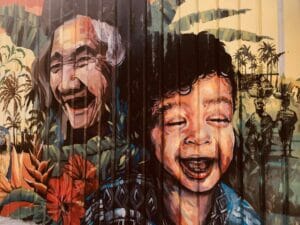 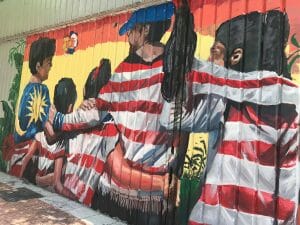 Certainly these pieces of Art best depict Kuala Lumpur as the ‘City of Diversity’. As three major ethnicities call this city home: Malay, Chinese, and Indian. This conglomeration of cultures is what makes Malaysia exciting. It’s a sort of a social encounter through images, I should say, with Malaysian society. Here are some of the snaps you can feast on. 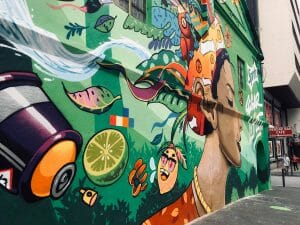 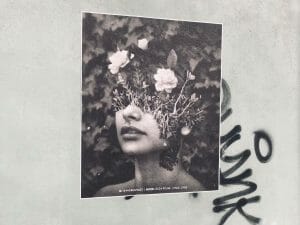 Platform for Advocacy and Activism 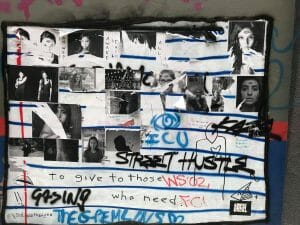 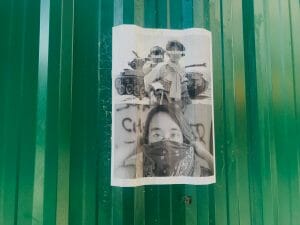 Activists and social movements from far and wide have been using Art to promote advocacies and bring socially relevant issues- issues that barely get a place in a bureaucratic structure. Street Art represents a protest, a visual dialogue, translating silence into a voice that screams. Some of these pieces of Art are straight up thought provoking. 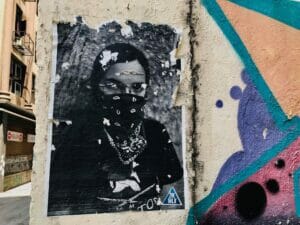 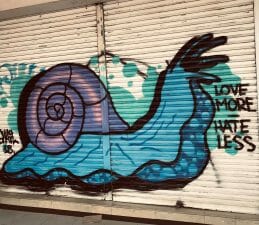 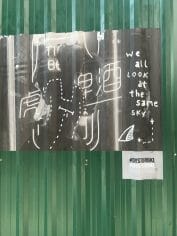 No one is really there to cheer you up as most of us are practicing social distancing. This pandemic allowed our creative juices to flow to stave off boredom. Some did personal renditions of TikTok, many have tried creating their version of Dalgona Coffee and failed, some even finished reading several books, and the list goes on. As revealed from history, Shakespeare wrote some of his best poems and plays during a plague. Art spoke to me in a very personal way. It is special to me not only that I was bored and needed a distraction of some sort. Surely, Art has always been my refuge whenever anxiety sets in. Art appreciation is like placing myself in a cul-de-sac, my go-to space of isolating myself even more.

‘How is this connected to humanism?’, you may ask. My short answer to that is, ‘Art was the medium used during the Renaissance to promote humanism after the Bubonic Plague. Art is a medium to express human freedom, aspirations, and civic virtues’.

At long last I decided to pull over the nearest bus stop, after over two hours of walking.  As I sit on a bench, I watched the storm develop and thunder breaking the Earth’s sound barrier. Next thing I remember the rainclouds formed into random shapes.  Sooner a downpour drenched the streets.

This current pandemic may have managed to shoo people away from the streets. However, I found my respite in Art. 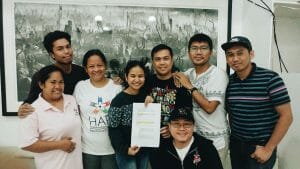 February 19, 2016 I don’t want to start my birthday with loads of negative emotions, so I’m just gonna let these all out. You already probably heard about it. Yes, about Manny Pacquiao’s statement, his usage of words from the Bible to back it up, and the outrage of the LGBTQIA+ community against it. Now, […] 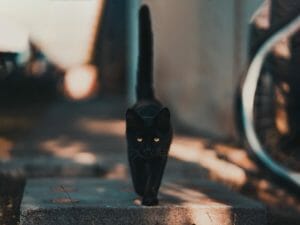 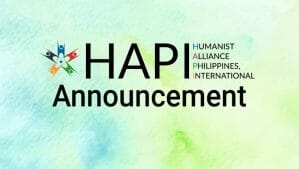