Stop Blaming a Minority for Wanting the Same Rights As You

In light of the divided consensus over the Sexual Orientation and Gender Identity and Expression (SOGIE) Equality Bill in the Senate and the recent brouhahas surrounding transgender woman Gretchen Diez, it’s occurred to me that there is now a greater pushback towards the LGBTQ+ community in the Philippines than ever before.

It’s not uncommon for a conservative majority to hiss & bare their teeth when they feel like the “liberal agenda” is threatening their lifestyle. This has happened so regularly in other countries that it was easy to anticipate a backlash occurring here, as well. But for a time, LGBTQ+ ‘acceptance’ seemed to genuinely gain traction in the Philippines.

It was enough to make you think that yes, the Philippines was finally coming along; that it was finally catching up to the West’s progress on the issue; that it was, at long last, “getting it”. (“It” being the simple fact that all humans deserve equal rights despite our natural differences.)

But then news broke that a mall in Quezon City detained Gretchen Diez for using their women’s bathroom, and the Philippines quickly reminded us of how viciously, unabashedly LGBT-phobic it still could be.

In the ensuing media circus, Diez drew the support of Bataan Representative Geraldine Roman and Senator Risa Hontiveros. She guested on talk shows. She hinted that she may run for office. She posed with Senators Imee Marcos and Bong Go, and President Rodrigo Duterte himself met with her in Malacañang.

She received a torrent of transphobic hate every step of the way. And since the coverage had made Diez the unofficial poster child for the local LGBTQ+ community, the haters made sure to extend the vitriol to us, as well.

First, there were the usual hysterics from the religious right. Eddie Villanueva and the Coalition of Concerned Families of the Philippines both denounced the SOGIE Equality Bill as a “one-sided” affair that “threatened freedoms” of straight people, and dismissed transgenderism as mere “pag-iinarte”. The Catholic group Courage Philippines insinuated that gender expression dramatized “superficial differences” of the sexes.

The most audacious claim came from the Intercessors of the Philippines, who said that enough laws already exist to protect the rights of the LGBTQ+ community.

Senate President Tito Sotto, who once asked why LGBTQ people can’t just call themselves homo-sapiens, also chimed in, saying that the SOGIE Equality Bill would only “impede” religious & academic freedom and “smuggle” same-sex marriage into the country. He also swore that the bill would have “no chance” of getting passed in the Senate.

None of these arguments are particularly original. In developed places like the Nordic countries — where gay rights hasn’t been an issue in decades — arguments like those of Villanueva, Sotto, and co. have long lost their credibility, due to them being anti-human rights by nature. 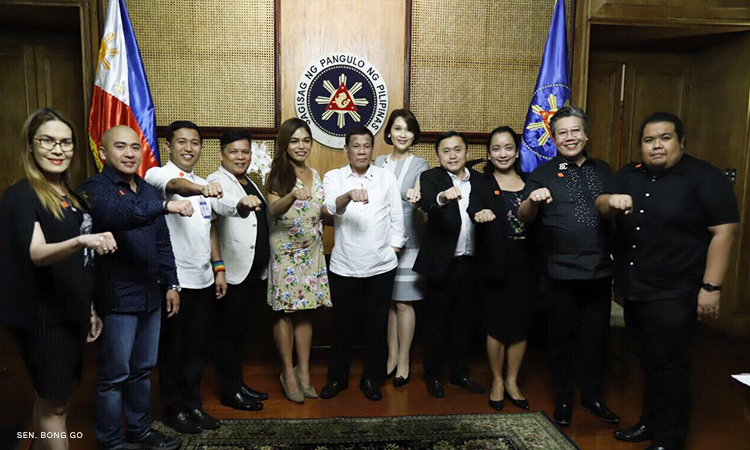 Photo via the Office of Sen. Christopher Go

What was surprising was that a small contingent of LGBTQ+ people agreed with their fallacies, including a gynecologist whose viral post echoed the bare-faced lie that LGBTs have enough protections in the country; and celebrity hairstylist Ricky Reyes, who asserted that the LGBTQ+ community should just “learn to stay in their place”.

While it’s a bit over-the-top to say that these men have effectively “betrayed” their community with these statements, they do help demonstrate how much of a bitch Stockholm Syndrome can be.

The masses draw their fangs

Yet as detrimental as these influential figures’ half-baked fallacies have been to the overall SOGIE discourse, it’s still not quite as unsettling as hearing your relatives echo the blind hatred in real life and on social media.

These days, the eyes aren’t the only windows to the soul; so is your Facebook timeline and your Twitter feed. And from what I’ve seen in the wake of the Gretchen Diez saga, a lot of souls in this country really, really do not want to share equal rights with the LGBTQ+ community.

To see members of my own family & friends openly airing their transphobia and homophobia on their soc-med pages was eye-opening. Just when you thought their feminist ideals and support of your coming-out would make them natural allies to the struggle of the queer community and SOGIE Equality, you’re reminded that bigotry can run really deep in a lot of people’s veins.

Many times, critics (including Ricky Reyes) would use the phrase “lumugar kayo” (stay in your place) to shut down SOGIE activists. This brand of elitist snobbery comes from a very privileged space; it’s the kind of thing you say when you wholly believe that your worth as a human being exceeds another, and it is insidious.

Like Villanueva, the online “mob” also downplayed the struggle of the queer community, at times even reducing debates with SOGIE advocates to a petty contest of “who’s more oppressed than whom”. (The tactic might qualify as gaslighting, if it didn’t so obviously come from cultural transphobes and homophobes who simply don’t know any better.)

When you consider that this is only a fraction of the thousands, if not millions of critics, all of whom likely have at least one LGBTQ friend and/or family member — what does that say about the level of esteem they’ve held us on, all this time?

For every positive retweet or post of the moral support shown by various celebrities,  beauty queens, university professors, and politicians like Risa Hontiveros and Leni Robredo for the SOGIE Equality Bill, half-a-dozen trans and homophobic comments arose. If academics and stars cannot turn the tide of hatred in the country, who can?

The hypocrisy on display is truly astounding, but the inability of people to be aware of theirs is just as disgraceful.

An Epidemic of Myopia

Given that the Philippines is a country made up of minorities — ranging from brown people to women to Muslims to queers — it’s tough for me to understate the nearsightedness many Filipinos have displayed throughout the SOGIE saga. In the debate over LGBTQ+ rights, it’s important for Filipinos to remember that they themselves are a minority… and few things are as sad and counter-productive as watching a minority, shame another. As the discourse escalates, a little empathy (on both sides) can save us a lot of time, and maybe even a life or two. 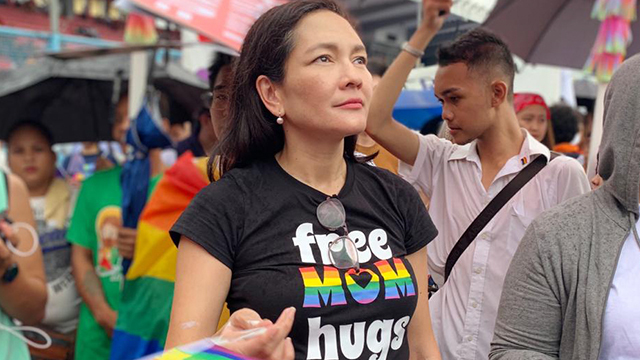 Photo via the Office of Sen. Risa Hontiveros

It was only about a hundred years ago when Filipinos decided they’d had enough of Spanish rule. They could have let it continue as it did for 333 years; after all, the system was “working”, and food was being put on plates. But heroes like Bonifacio and Aguinaldo knew that Filipinos needed to gain our independence from the colonizers, for we were never truly “lesser” than them. And so despite the thousands of inevitable casualties and the administrative nightmare of getting the Philippines to stand on her own two feet, they revolted against the Spaniards. They did it because feeding on scraps was never going to be enough; everyone deserved a seat at the table.

The same principle applies here. For so long, transgender people have been treated as sub-human caricatures in the Philippines. Transgender beauty pageants have often been reduced to parodies of cisgender pageants (or at least never accorded the same legitimacy). In film, the amount of realistic representations of transgender and gay people is greatly outweighed by their portrayals as token, one-dimensional sidekicks used for comedic relief.

Even as local gay comedians rose to become beloved icons, the country at large has never really fully respected the humans behind the drag, the make-up and the outsized personalities. How many people would let Vice Ganda marry a man?

Think about the wedding planning industry, and the jobs a lot of gay people have in it. Imagine believing that these men & women could design your gown, do your hair & make-up and bake your cake, but not deserve to experience every bit of happiness you do in that occasion.

There is prejudice, exclusion and heterosexual bias in that belief, and for the sake of the LGBTQ+ minority, it can go unaddressed no longer. Similar to how colonized Filipinos were never going to just “sit there and take it”, queers today shouldn’t, either. That is why enacting protective legislations like the SOGIE Equality Bill and campaigning for same-sex marriage is and always will be a legitimate plight — because equality is a basic right deserved by all.

There can’t be just 1 Pride flag-bearer

The current fever-pitch of the cultural conversation regarding SOGIE was catalyzed by Gretchen Diez’s detainment on that fateful night a month ago. To be clear, this article isn’t a blanket defence of her: hobnobbing with the likes of Imee Marcos and her premature declaration of political intent proved that she is far from a perfect representative of the LGBTQ+ community.

But then, who could be? The LGBTQ+ community is not a monolith. It’s a minority made up of minorities, and infighting is common. As men like Ricky Reyes have demonstrated, it is possible to be a part of the community and still be LGBT-phobic. If there’s any takeaway from this moment, it’s that we ought not be too eager with choosing a single “face” for the movement (not that Gretchen was officially chosen).

As humanists, though, we do not prioritize the fallacies and the misconceptions and the infighting. Our main priority is the human condition. So regardless of whoever is putting their two cents on the SOGIE issue — supporter or otherwise — we are not distracted by their bias. The fight for equal human rights includes the rights of the gay and transgender communities and everyone in between; this remains true whether or not you believe in it.

As the national discourse over SOGIE Equality continues, perhaps the LGBTQ+ community does not need a “face” or a flag-bearer. Maybe we should all just start to treat the person next to us as an equal, and let that attitude lead us onwards.

HUMANISM in a nutshell

Humanism is quite a new concept in the Philippines. A few atheists have been propagating their ignorance about the meaning of humanism. They think humanism is all about giving, charity or humanitarianism. As atheists, they could have done their own research, but, they’d rather paint HAPI a different color of their ignorance. Don’t we want […]

Sherwin Dane Zauro C. Haro (“Shane”) is a Communication Arts student and HAPI Scholar. He is a campus journalist, host and news anchor. His current religion is “Lana Del Rey”. His favorite narcotic is love, though he couldn’t find any permanent dealers lately. He’s learning Spanish at the moment, and thinks it’s a lovely language.