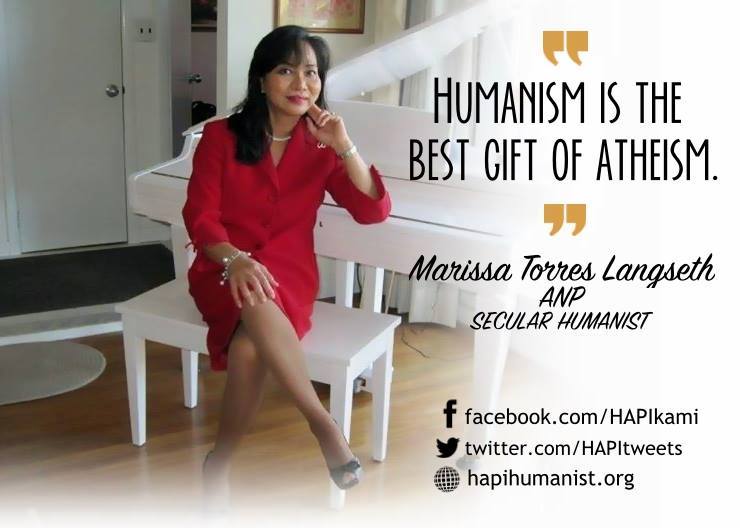 Marissa Torres Langseth, a.k.a. "Ms. M", rose from humble beginnings and managed to become financially independent at an early age. She strove to help her family and the occasional needy. She earned her degree of Bachelor of Science in Nursing in Cebu, Philippines, then worked in the Kingdom of Saudi Arabia for four years. She traveled to the USA in 1990, working three jobs in the early years of her stay in New York City. She also returned to school for a Master's degree in Nursing and a Certificate in Adult Nurse Practitioner. She has been a USA citizen since 1995, and happily married since 1996.

She first founded the Philippine Atheist and Agnostics Society (PATAS, stands for “equality” in Tagalog) on February 14, 2011. Eventually, she took her attention from PATAS in December 2013 and founded Humanist Alliance Philippines, International (HAPI) so as to create a newer and better avenue to spread humanism. Despite several setbacks and challenges, HAPI has repeatedly bounced back, learning from past mistakes. She was responsible for the seed money of both PATAS and HAPI, and is still the biggest donor of HAPI to date. She has been a volunteer activist since November 2010.

“Life is no longer about pursuing money, but making oneself happy and HAPI.”

She now serves as the HAPI Chairperson Emeritus while passing the torch of success to the new leadership in the person of Michael Sherman and Alvin John Ballares among others. Ms. M travels the world every three months with her beloved Norwegian-German American husband.

Ms. M remains a committed philanthropist to HAPI, some secular societies in the US, and to humanity.

Ms M in other media:

Book: No Outside Intelligence