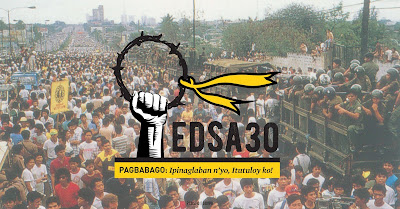 HAPI Statement on #EDSA 30 On February 25, 1986, the dictatorial regime of President Ferdinand E. Marcos was overthrown by a peaceful social revolution. The Philippine humanist community joins its voice in the commemoration of this event. What happened to the nation after People Power may not be celebratory, but ending a regime in which 3,500+ people were randomly killed without due process of law is, without doubt, something to celebrate.

HAPI condemns any and all forms of dictatorship, then and now. To be a HUMANIST means to genuinely care for each other and humanity, a key tenet of which is to hold that democracy and human development are matters of right.

We, in HAPI,  stand united to never allow our people to forget the horrors of the Martial Law years, and to never allow such things to happen again, by guarding our liberty and freedom to express, pushing for civic equality and human rights, and fighting against discrimination in all its forms.

Photo (c) Official Gazette of The Republic of the Philippines
www.gov.ph

Planeteers Unite! When HAPI joined Planet Cora Written by Mutya Valenzuela February 9, 2020 Las Piñas City, Philippines   January 24th marks the first Planet Cora Coastal Clean up for the year 2020 and as the HAPI Secretariat Head Operations I would not pass up that chance of joining them.  I have always been into […]

From Fear To Fascination

From Fear To Fascination by Glemir P. Sordilla Bacolod City   The concept of fear has since plagued the human mind of its existence. How come something has the ability to make you tremble and make you feel dread? To explain fear is complicated it is the uneasiness or the feeling that something bad is […]

Humanist Alliance Philippines, International Junior, the youth wing of Humanist Alliance Philippines, International joined a community-led coastal clean-up at Sitio Dacutan Dacu, Silay City, Negros Occidental last 17 of November 2018. The coastal clean-up that was initiated by a local public school teacher Miss Divine(as she preffered to be called) because of the staggering amount […]

By Emmanuel Ikan Astillero September 14, 2017 8PM (+8 GMT) Makati, Philippines Before the Spaniards came in 1521, our place names were originally our own. When the Spaniards came, together with the forced subjugation of our society, and the forced conversion to Christianity, our original place names were replaced by foreign names. This practice of […]